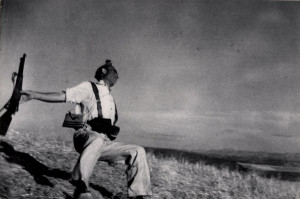 Robert Capa is a name that has for many years been synonimous with war photograhpy.
Born in Hungary in 1913 as Friedmann Endre Erno, Capa was forced to leave his native country after his involvement in anti goernment protests. Capa had originally wanted to become a writer, but after his arrival in Berlin had first found work as a photographer. He later left Germany and moved to Grance due to the rise in Nazism. He tried to find work as a freelance journalist and it was here that he changed his name to Robert Capa, mainly because he thought it would sound more American.
In 1936, after the breakout of the Spanish Civil war, Capa went to Spain and it was here over the next three years that he built his reputation as a war photographer. It was here too in 1936 that he took one of his most famous pictures, The Death of a Loyalist Soldier. One of Capa's most famous quotes was 'if your pictures aren't good enough, you're not close enough.' And he took his altitude of getting close to the action to an extreme. His photograph, The Death of a Loyalist Soldier is a prime example of this as Capa captures the very moment the soldier falls. However, many hae questioned the authenticity of this photograph, claiming that it was staged.
When World war II broke out, Capa was in New York, but he was soon back in Europe covering the war for Life magazine. Some of his most famous work was created on 6th June 1944 when he swam ashore with the first assault on Omaha Beach in the D-Day invasion of Normandy. Capa, armed only with two cameras, took more than one hundred photographs in the first hour of the landing, but a mistake in the darkroom during the drying of the film destroyed all but eight frames. It was the images from these frames however that inspired the visual style of Steven Spielberg's Oscar winning movie 'Saving Priate Ryan'. When Life magazine published the photographs, they claimed that they were slightly out of focus, and Capa later used this as the title of his autobiographical account of the war.
Capa's private life was no less dramatic. He was friend to many of Hollywood's directors, actors and actresses. In 1943 he fell in love with the wife of actor John Austin. His affair with her lasted until the end of the war and became the subject of his war memoirs. He was at one time lover to actress Ingrid Bergman. Their relationship finally ended in 1946 when he refused to settle in Hollywood and went off to Turkey.
In 1947 Capa was among a group of photojournalists who founded Magnum Photos. This was a co-operative organisation set up to support photographers and help them to retain ownership of the copyright to their work.
Capa went on to document many other wars. He never attempted to glamorise war though, but to record the horror. He once said, "The desire of any war photographer is to be put out of business".
Capa died as he had lived. After promising not to photograph any more wars, he accepted an assignment to go to Indochina to cover the first Indochina war. On may 25th 1954 Capa was accompanying a French regiment when he left his jeep to take some photographs of the advance and stepped on a land mine. He was taken to a nearby hospital, still clutching his camera, but was pronounced dead on arrival. He left behind him a testament to the horrors of war and standard for photojournalism that few others have been able to reach.
Capa's legacy has lived on though and in 1966 his brother Cornell founded the International Fund for Concerned Photography in his honour. There is also a Robert Capa Gold Medal, which is given to the photographer who publishes the best photographic reporting from abroad with evidence or exceptional courage. But perhaps his greatest legacy of all are the haunting images of the human struggles that he captured.
Collapse