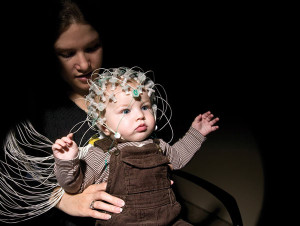 Controersy exists over whether newborn infants possess an innate ability to perceive facial features, or alternatively that they learn to recognize faces through exposure to the world around them.
Some scientists argue that babies begin life knowing how the human face is organized; in other words that newborns have some genetic predisposition to recognize and distinguish between faces. Although we cannot be certain what exactly babies see when they look at a face in front of them, they have an innate preference for gazing at facelike objects, such as a pair of round blobs over a horizontal line. It is argued, therefore, that newborns have some simple representation of facial structure. We know this because newborns see well enough to imitate an adult's facial expressions and can distinguish among faces, even recognizing their mother's face soon after birth. At this time they also show a prefernce for attractive rather than unattractive faces. However, if the images of the faces are turned upside down, infants show no preference for attractive over unattractive faces. All these abilities are present so early in life that there can be no time for learning them, leading some psychologists to argue that people are born with an innate knowledge of basic facial features.
Other scientists argue that newborns probably focus on general elements of faces such as the shape of the head and curved contours, rather than facial features themselves. Researcher Paul Quinn has shown, for example, that infants of three to four months distinguish among silhouettes (i.e., shapes with no internal features) of the heads of cats and dogs. They also show preference for pictures of cats over horses and chairs over tables. Such a propensity to prefer cats to horses is unlikely to be the result of innate factors. Rather, the infants have some inbuilt preference for general perceptual features. They also show a preference for unfamiliar things.
A series of studies by Pascalis, de Haan, and Nelson lends support to the hypothesis that face perception is learned rather than innate. According to these researchers, aging causes the brain to tune in to the types of faces seen most often and to tune out the other types. A newborn relies on broad visual clues that eventually get replaced by a system for rapidly recognizing familiar human faces.
The researchers showed pairs of photos - of people and a species of monkey - to the three groups: six-month-old babies, nine-month-old babies, and adults. One of each pair of photographs was shown first to make it familiar to the subjects since experiments have previously shown that humans, from newborns to adults, are attracted to novelty or unfamiliarity. Later, the pairs of photographs of people and monkey were shown to the three groups. The babies in the youngest group spent more than a second longer looking at the novel pictures of both humans and monkeys. The differences in looking-time shows that these six-month-olds recognized which photo was novel and which was familiar, regardless of species. However, the nine-month-old babies spent more time looking at the new human face only. The adults followed the same pattern as the nine-month-old infants, spending a longer time looking at the new human face, but about the same amount of time looking at the new and familiar monkey faces. This shows that nine-month-olds and adults no longer have the ability to discriminate faces of other species that the six-month-old infants have.
The researchers argue that the results show that young babies have the ability to differentiate between faces of different species but that this ability becomes less marked by the age of nine months. Interestingly, the loss of this ability to discriminate among faces of monkeys occurs at the same time that infants lose the ability to discriminate among foreign speech sounds. At six month of age infants can discriminate among sounds of nearly all languages, but between nine and twelve months, they start to specialize in discriminating only the sounds of the languages they hear regularly. Just as with visual face perception, speech sound perception appears to narrow during an early tuning period that is dependent on learned experience rather than some innate characteristic. At present, researchers are uncertain whether this is a developmental coincidence or a result of an underlying general mental apparatus.
Collapse